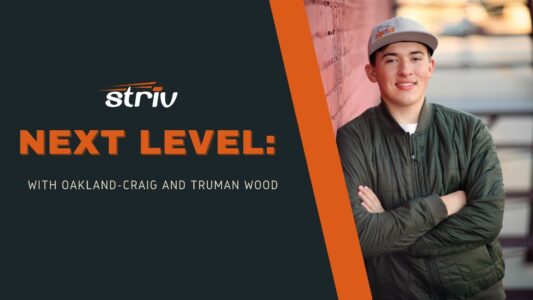 NEXT LEVEL: Oakland-Craig Student awarded a full-ride scholarship to UNL for digital media

With the continued growth in the media and communications industry, the time is now to learn how your school can integrate digital media education into your curriculum. According to the U.S. Bureau of Labor Statistics employment in film and video editors and camera operators is projected to grow 29 percent from 2020 to 2030.

But this isn’t news for Truman Wood, a Striv Student who was just awarded a full-ride to the University of Nebraska at Lincoln for his involvement with digital media and Striv. Truman has been involved with his Striv program at Oakland-Craig Public Schools for about 3 years now.

“As soon as our school adopted Striv, me and my friend were the ones to jump on it right away. At first, we started out so basic. Then we adopted sound equipment, advertisements, and more. Now me and my friend commentate all the games”, said Truman.

“It’s so much fun and has been a huge part of my life.”

Truman really was the first student involved with his program. “At first, it was a learning curve, but once we started using Wirecast I got the hang of it, and was so pleased with how easy it was. Being a part of Striv has really given me the time in school to take that to the next level.”

Taking it to the next level is what Truman accredits his scholarship to. “I feel like the amount of time I put into Striv really helped. Out of 3 years, I have spent the past two putting the time in. It’s been a huge factor in my success and future success. I feel like the amount of time and leadership skills that I learned over the years were huge. Now we have a class of 10-12 students that I get to help lead.”

Leadership, hard work, and commitment are just a few of the things that Truman believes helped him with his scholarships. He will be majoring in sports communications and media productions. This growing field is becoming more and more popular with students like Truman, and there are so many scholarships out there for our #strivschools!

“If you look hard enough, really put the time in, and tell a compelling enough story there are a lot of digital media scholarships out there for students like me!” said Truman.

We are so proud of our Striv Students and we love sharing their success stories. Congratulations Truman!