Paving the Road Back Home

A point that Assistant Technology Coordinator at Johnson County Central (JCC), Marcus Scheer, wanted to drive home during his interview with Striv. Scheer is about the students and it’s been that way since he returned to where he grew up to make an impact on the kids that are in the shoes he once wore. 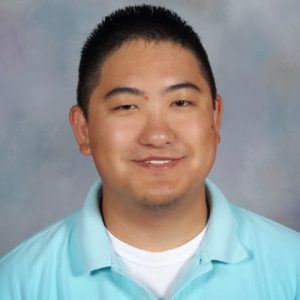 Marcus Scheer grew up in Cook, Nebraska and attended Nemaha Valley for high school. He went on to attend UNL and was successful in the marching band for four years while also excelling in his classes and receiving a News Editorial and Journalism degree.

Due to his involvement in the marching band, he was never able to work at HuskerVision, but that didn’t stop him from finding a way to follow the Husker events and to make an impact on covering them.

After graduation, Scheer made a successful career life for himself. He made good use of his degree and, to some maybe, had possibly the greatest journalism jobs ever with traveling the globe and writing, creating videos and photographing companies to do pieces on them. He found himself in places like Europe, South America, Washington D.C. and the list goes on.

But for Scheer, the more he traveled, the desire to return home became more and more clear.

“I wanted to be a member of the community”

That’s exactly what he did. He returned to the school he grew up in, now called Johnson County Central as it has consolidated since his years walking the halls. He returned stating, “I want to help contribute to something bigger than just myself.”

As he adjusted back into the area he grew up, he didn’t waste any time on being innovative with the school’s resources. Loving the growth in technology the school was working on under Technology Coordinator, Dustin Buggi, he wanted to keep the ball rolling. JCC was trying to stream some events but the system was broken. Firewalls and limited computers available did not allow for easy streaming or viewing. Scheer was determined to find a solution.

As it turned out, Jack Moles (JCC’s Superintendent) and Rich Bacon (JCC’s Athletic Director) were on the same search because they all stumbled upon Striv’s services around the same time. As Scheer said, “If everyone is interested in one thing, it’s probably a good idea.”

With the support of the administration as well as boosters and foundations, Scheer headed up Striv and began the steps on recruiting a team.

‘Due diligence’ is a phrase that, undoubtedly, has to ring through in anyone and everyone’s head if you listen to Scheer talk about his approach on things. “I took it step by step…I made sure the funding was in place, the coaches were on board and then started to get students that were interested involved.” 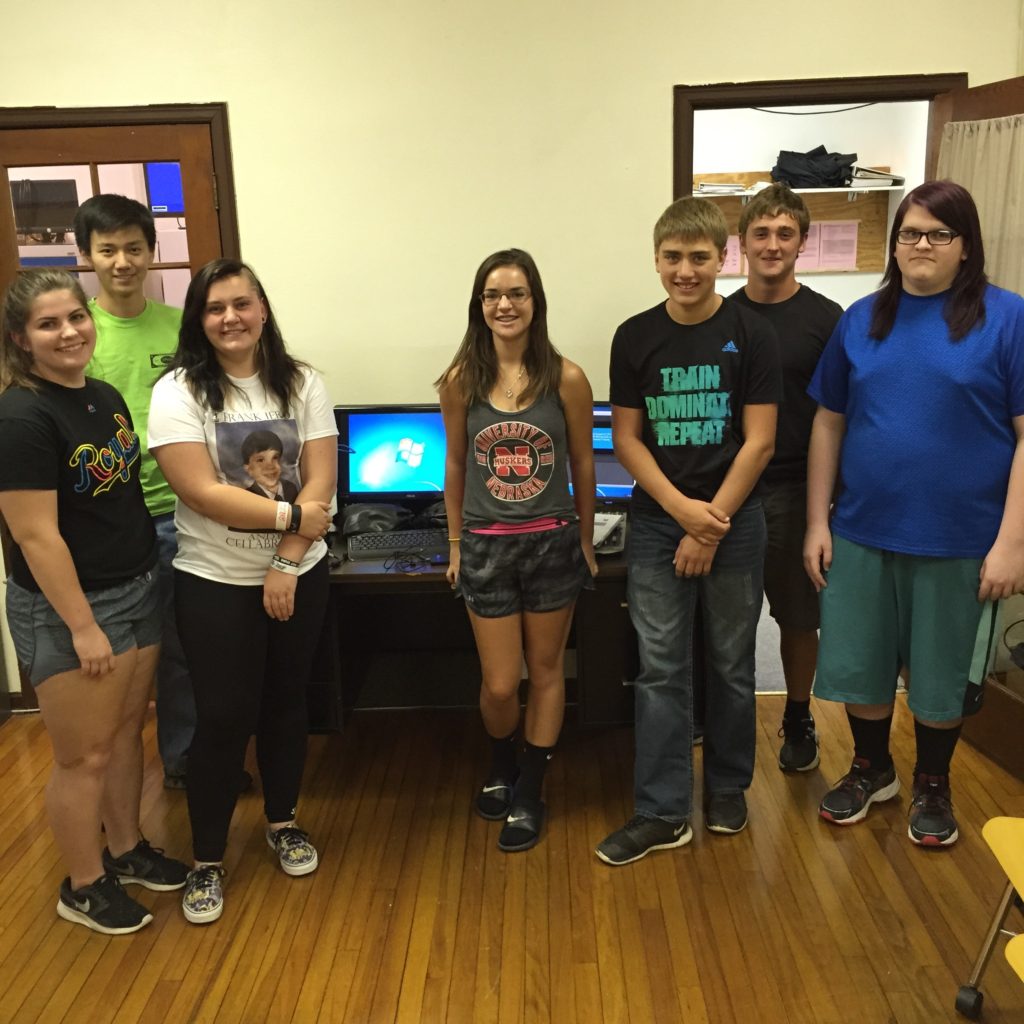 Scheer did a phenomenal job of finding reliable, intelligent, savvy students. He quickly taught them they are a part of this to represent themselves and also the school. They had limited training on the technical aspects and even knowing the ins and outs of the sports, but he had recruited talented students that were able to ‘fly by the seat of the pants’ and did a great job from the get-go and continue to do so.

Scheer realized that knowing the sport that the Striv team was commentating on and streaming was critical. He, once again, proved to be on top of this by bringing in the JCC Basketball coach for a ‘crash course’ in training them on terminology, knowledge of the game and more to get the Striv team to ‘the next step’ in their abilities.

The JCC Striv Team encompasses many features in the events they cover, including announcing, doing interviews, graphics work and so much more all while Scheer teaches them to create a ‘good presence’ and to make the most of every opportunity they have.

While Scheer has created and developed an ultra successful team, he also never stops making every opportunity all it can be. As they were able to cover the Conference Championship, Scheer thought it would be cool to have a graphic for the champion team. The problem: there were four teams remaining. He didn’t let that be a hold up as he created a graphic for each of the four teams so that him and the Striv team were fully prepared for whatever the turnout would be and they were ready for whoever the winner would end up being.

Scheer has created quite a system as JCC looks to the future of their school, all its successes ahead and the Striv team to help share all the stories for the school, community and beyond.

As the year closes and he looks to the years ahead, Scheer understands his recruiting process will begin again. Although he only loses seniors, Eddie Li and Natalie Roddy, he knows that they hold key pieces to what makes Striv so great at JCC. Eddie has been the ‘voice’ for JCC and has ‘such a great, unique take on the game’. Scheer has been told that viewers feel Eddie’s commentating is ‘addicting’ and they just couldn’t wait to hear what he has to say for the next streamed game. Eddie will leave big shoes to fill. 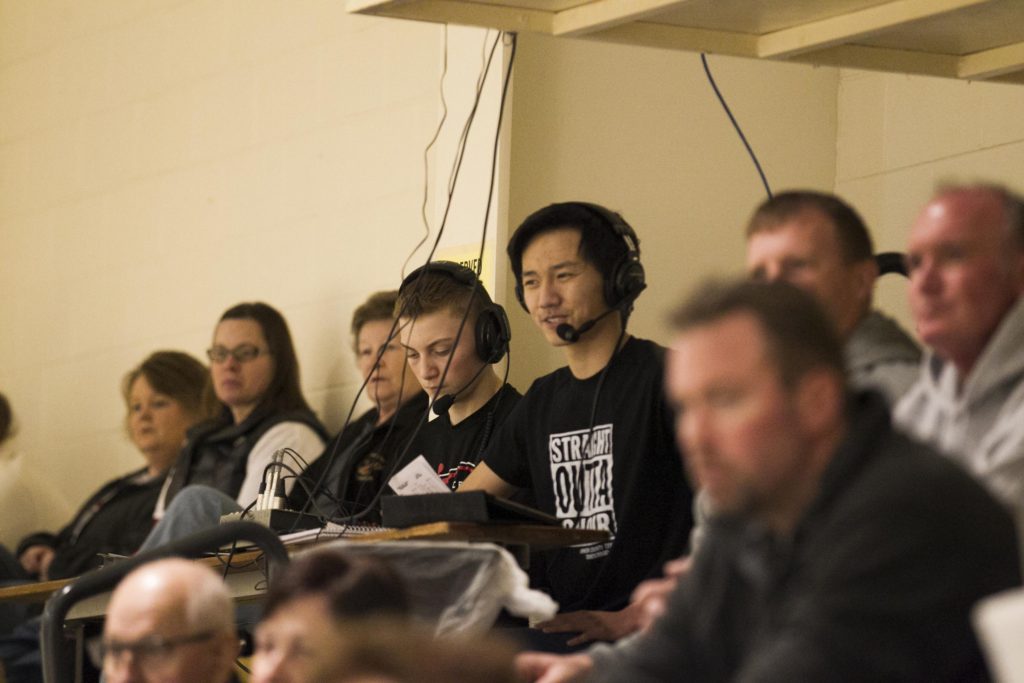 But Scheer knows he has great students remaining in junior, Courtney Klaasmeyer; sophomore Gabi Alvarado; and freshmen Tyler Bartels, Brady Clements, Jon Doty, Simon Rother. He wants to continue the feel of ‘family’ or ‘team’ that they have created in each other. They work hard, learn a lot and have development quite a friendship in each other. He wants that to continue to grow. He knows that all the successes they have had and will have are all dependent on THEM.

Scheer is asked what advice he has for other schools. He says that Striv provides a great opportunity and lasting memory for the students, whether they want to go into a related field or not. With all the work and effort Scheer puts into this, he still states that it is not about him. He wants to provide an incredible experience for the kids that gives confidence in public speaking and so much more. He wants to students to tell a story for themselves and for the school that leaves a legacy.

After all, that’s what he came home to do. 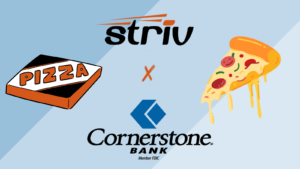 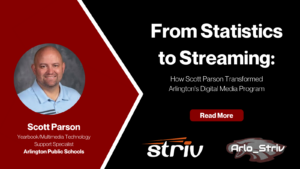